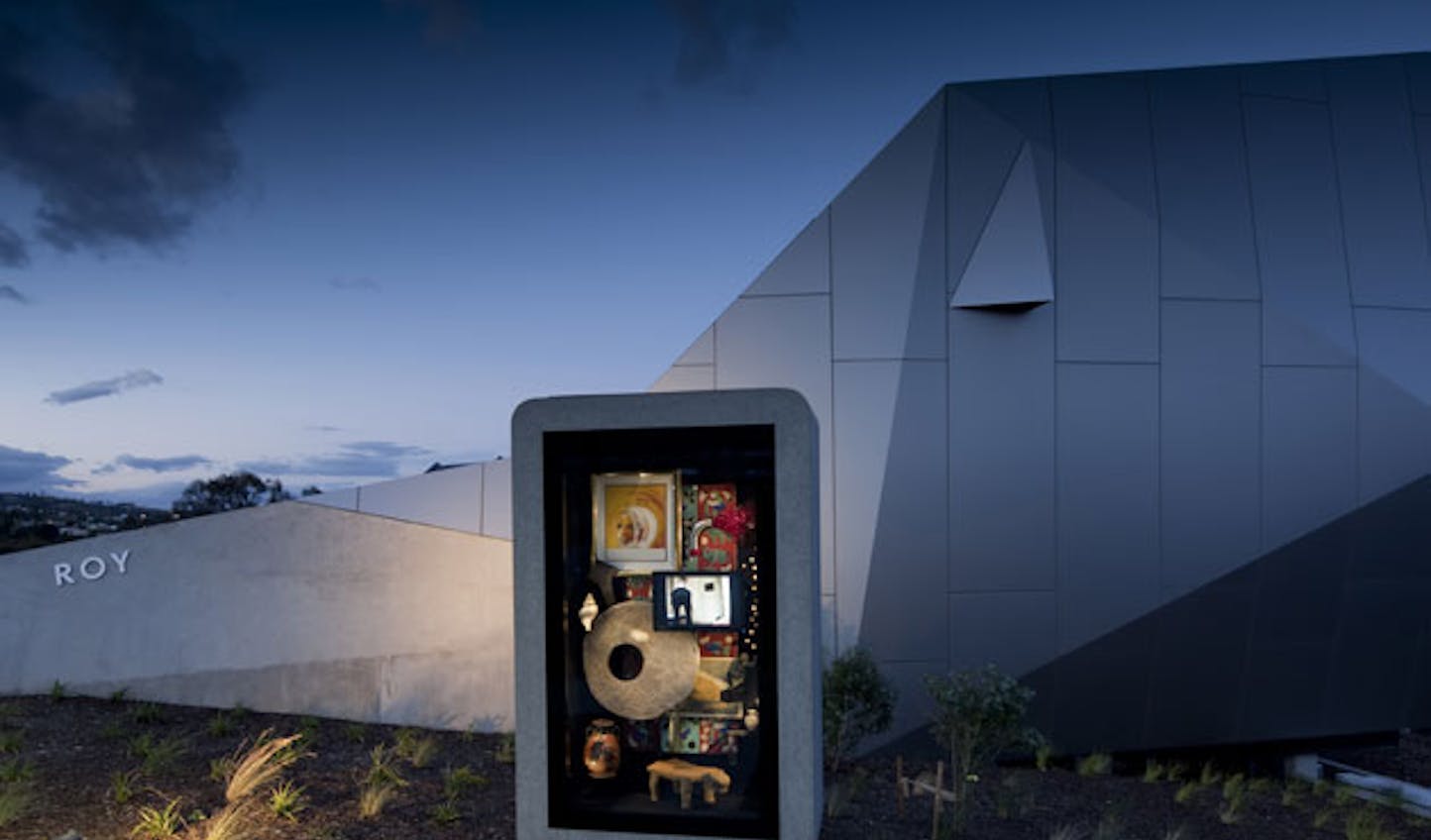 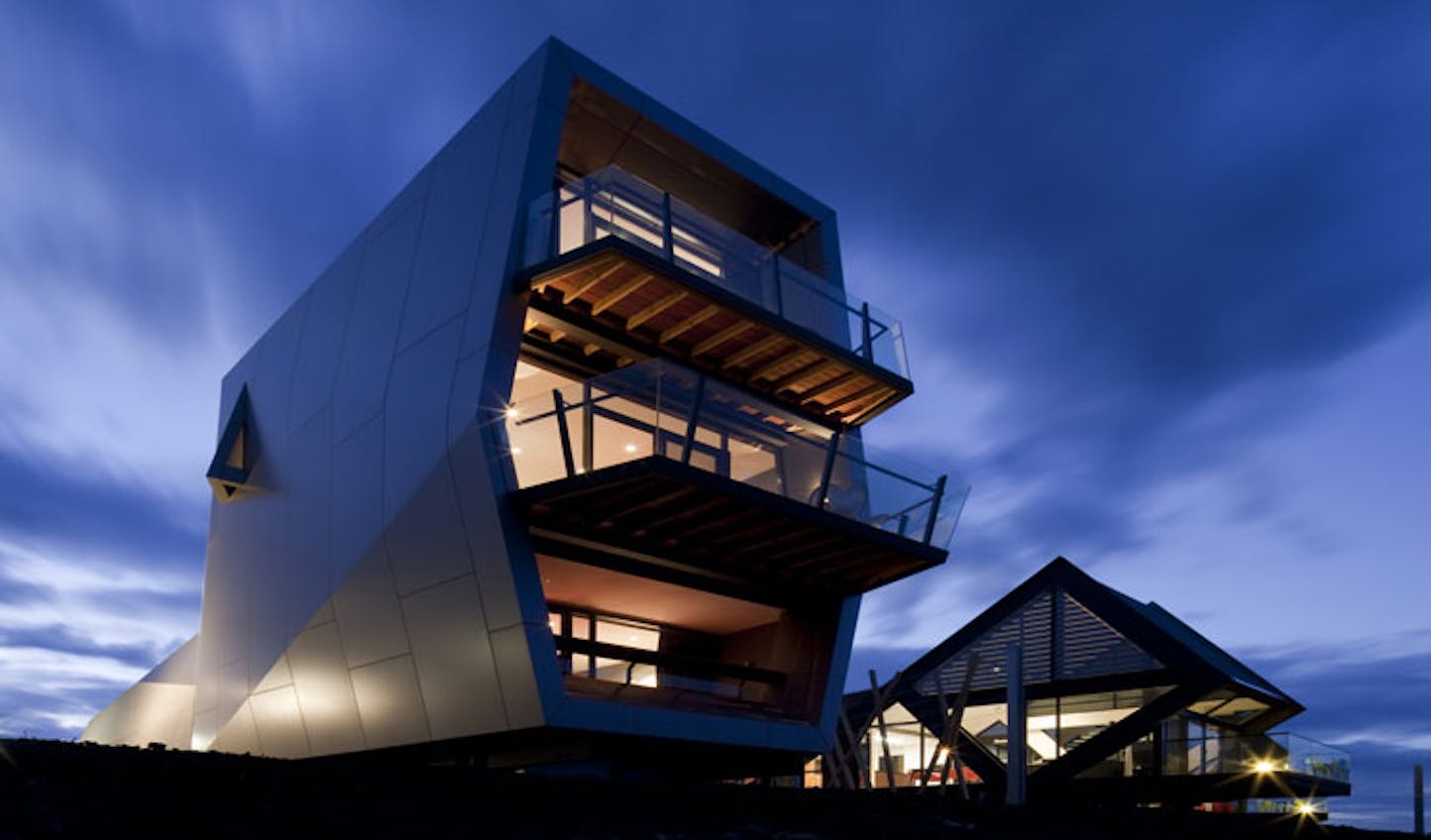 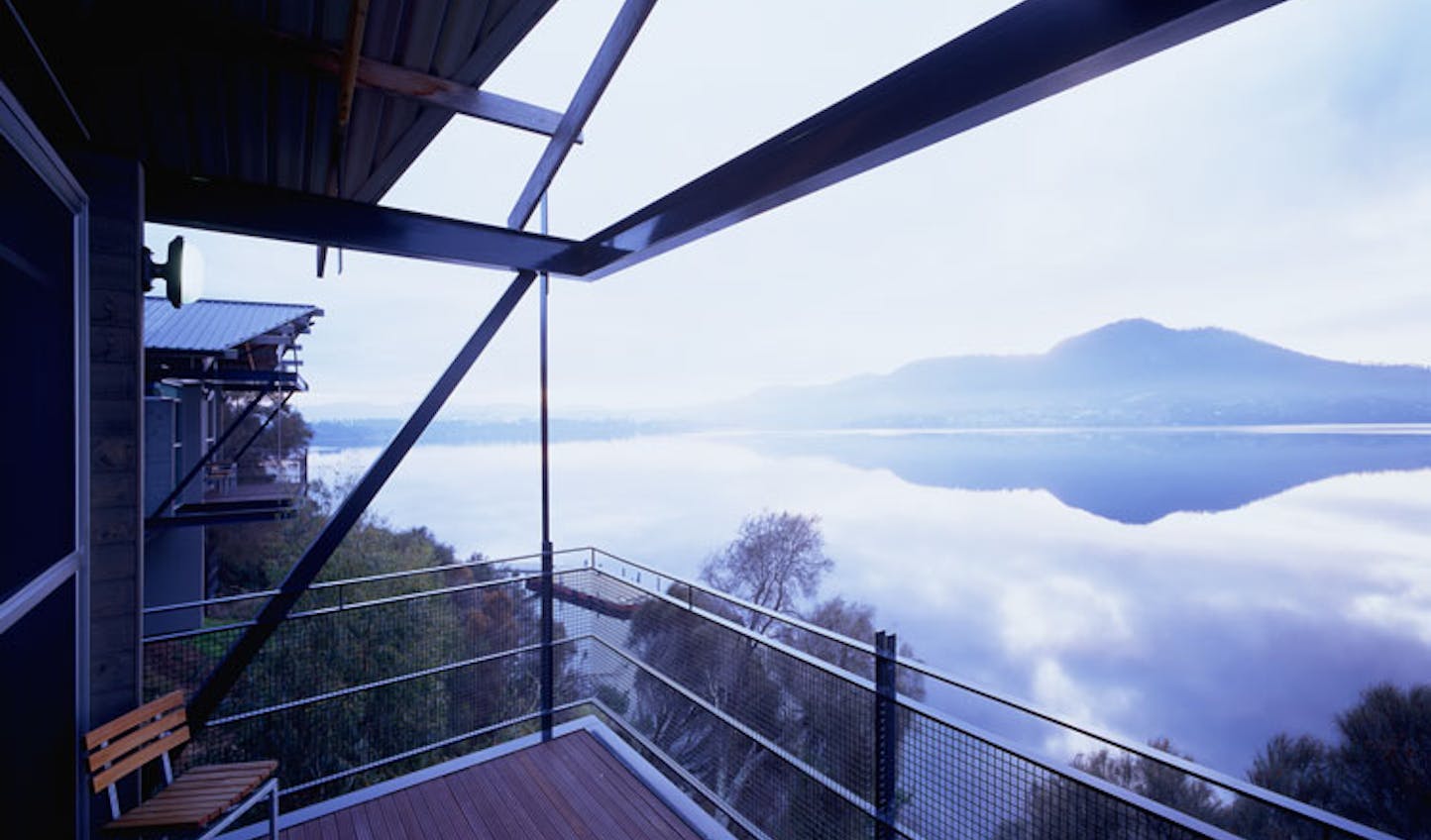 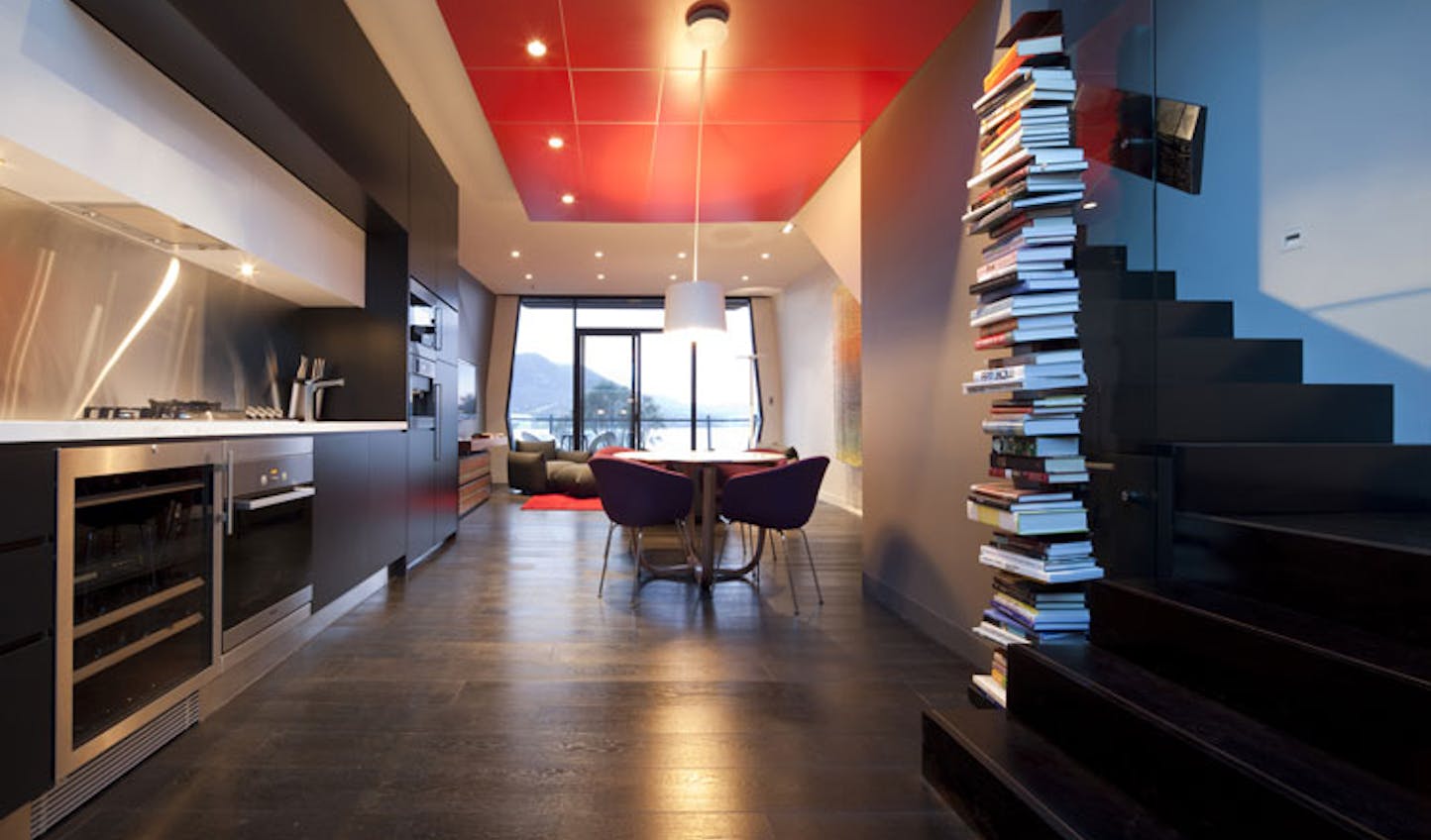 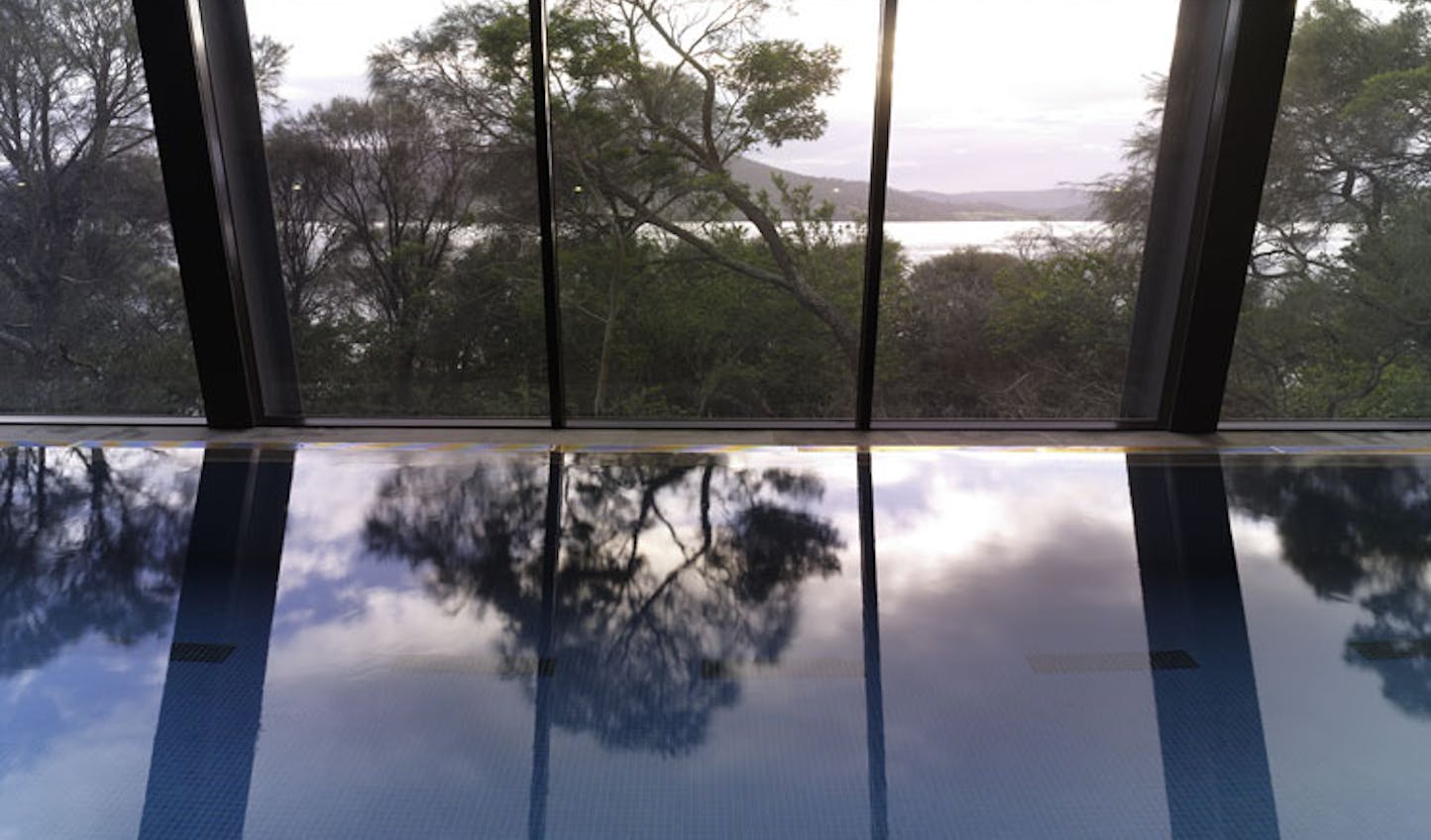 How about your own pool

When David Walsh puts his name to something, it’s going to be lavish, it’s going to be in your face, it’s going to be weird. Welcome to the Mona Pavilions – eight über-luxe riverside lodges on the banks of the Derwent. Situated on Walsh’s Moorilla Estate (an outlandish adult playground where the air itself seems thick with avant-garde creativity and artsy eroticism), this is the newest, most talked about bolthole in Australia. Absolutely off the wall.

The Mona Pavilions are dramatic in the extreme, so why not make the most of the theater while you’re there? For us, the only way to arrive is by catamaran, sailing up the Derwent before hopping off at Mona’s private jetty. Situated on a private peninsula just 15 minutes from Hobart city center, the Moorilla Estate is almost an anti-Holy See, a tiny, most impious micro-state within a state, where the boundless realms of wild creativity assume the role of religion in situ. The estate houses the magnificent modern cuisine and fine Moorilla wines of The Source restaurant, the MOO Brewery and the Museum of Old and New Art, whence the Pavilions get there name. With Hobart on your doorstep/just down the riverbank there’s a huge amount to keep you occupied, or simply kick back in the imposing modern splendour of your pavilion for a hotel experience like no other.

Individually designed, modern, linear and sparklingly tech-heavy, the eight pavilions are as mutually distinct as they are different from anything else you’re likely to have seen. Like the architectural lovechild of a spaceship and edgy modern art gallery, these are some of the most exciting, luxurious and sensually stimulating rooms we’ve ever stayed in. Named after famous Aussie artists and architectural luminaries, all eight villas are quite excellent, but plump for ‘Roy’ if you really want to splash out. Natural light pours in through the gigantic windows, illuminating the pavilion’s private pool, balcony spa and the gorgeously irreverent artwork dripping from Roy’s bedroom walls.

To put it simply, we like it done differently. Whatever ‘it’ happens to be. ‘It’, in this case, is vacation accommodations, and, taken in relation to the MONA Pavilions, that terminology jars as clankingly as calling Leonardo da Vinci an ‘artist’ or Lewis Hamilton a ‘driver’. Some places stick in the mind, but the MONA Pavilions blow ours like nowhere else.