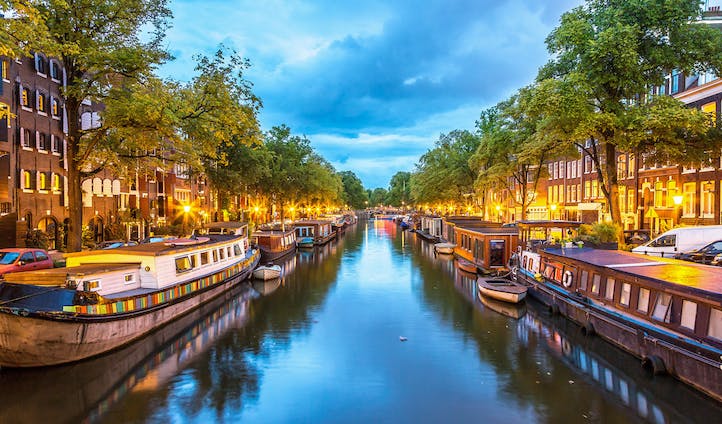 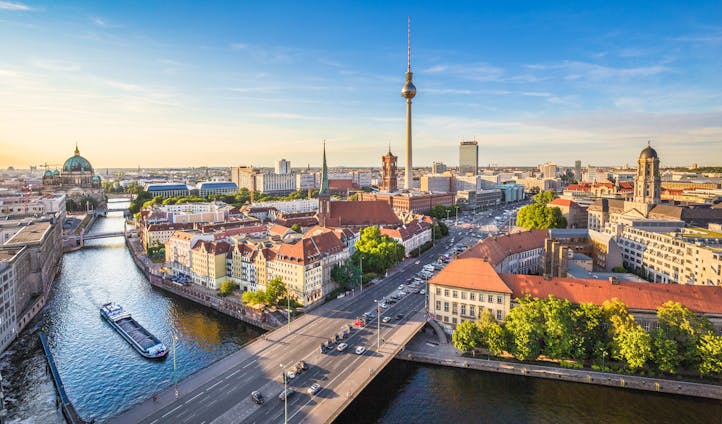 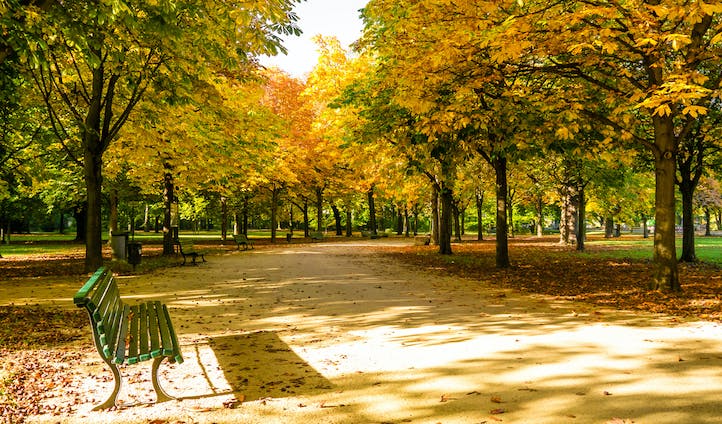 Enjoy a stroll through Tiergarten Park 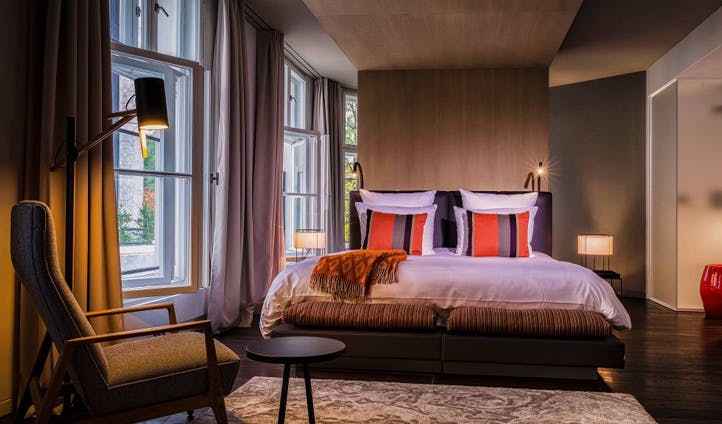 Your home away from home at Das Stue 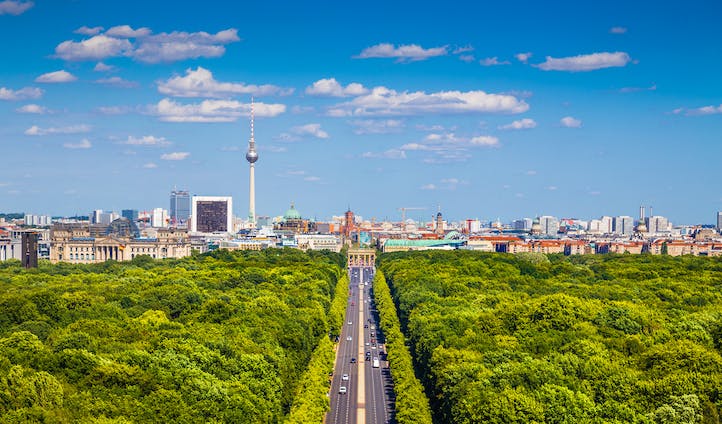 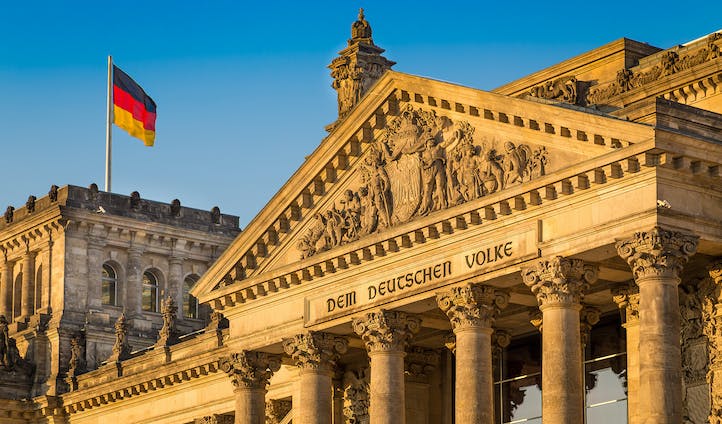 Get a sense of Germany's past and present at the Reichstag 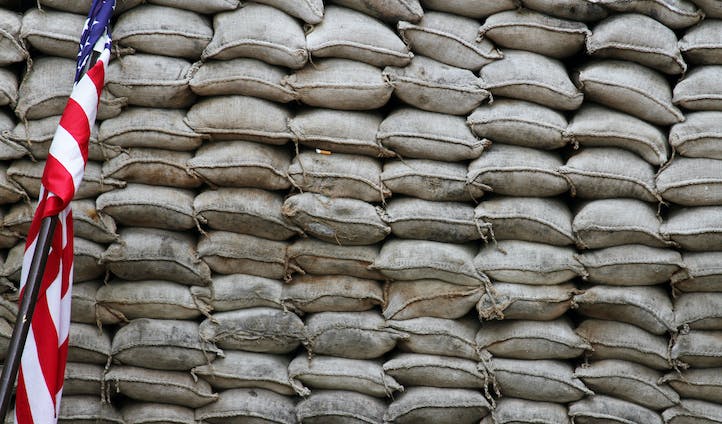 Get a sense of the division of the Cold War 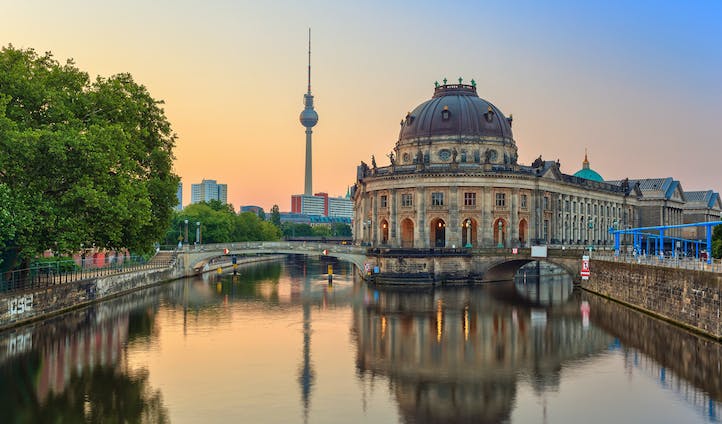 With five museums, you'll never be bored at Museuminsel 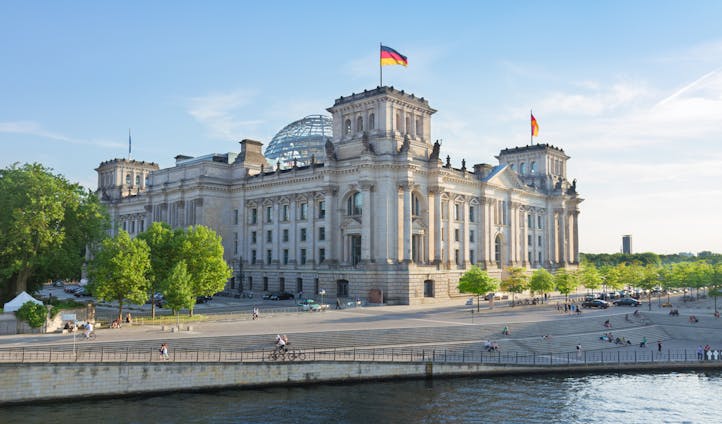 Berlin is a city built to impress 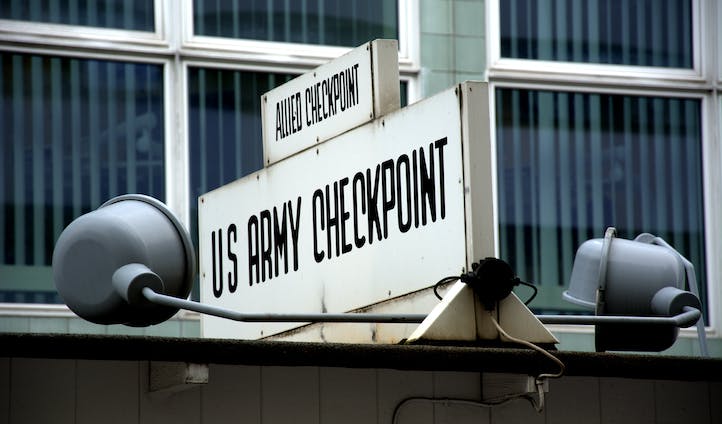 Stop off at Checkpoint Charlie 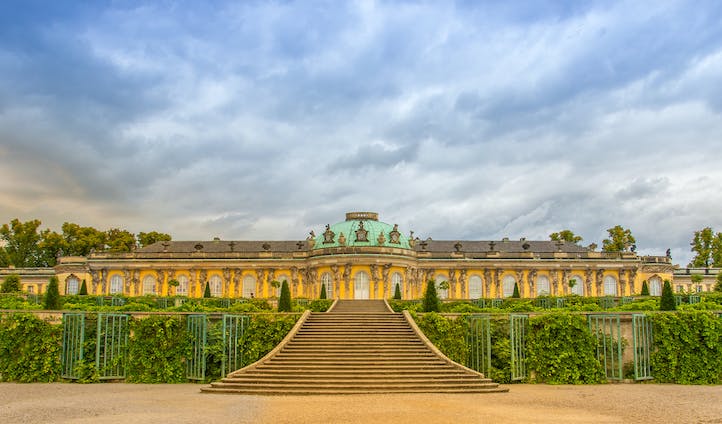 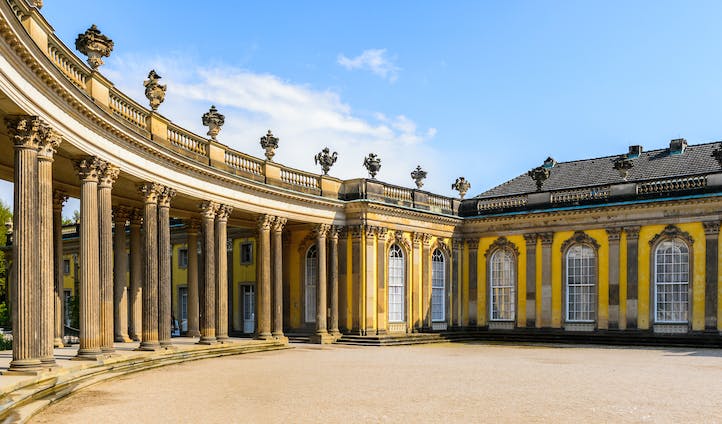 Stroll through the Rococo architecture of Schloss Sanssouci 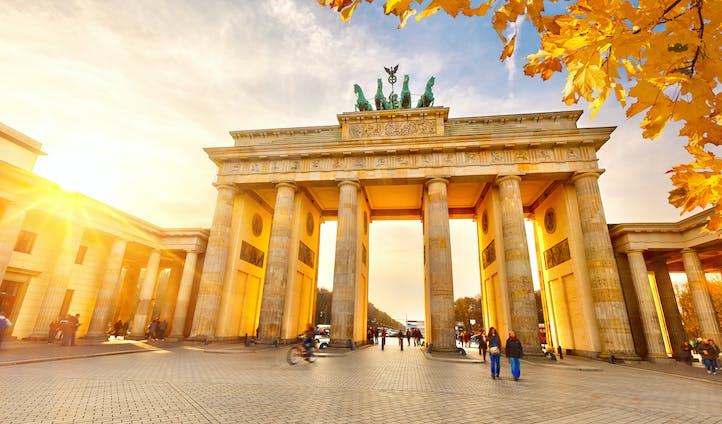 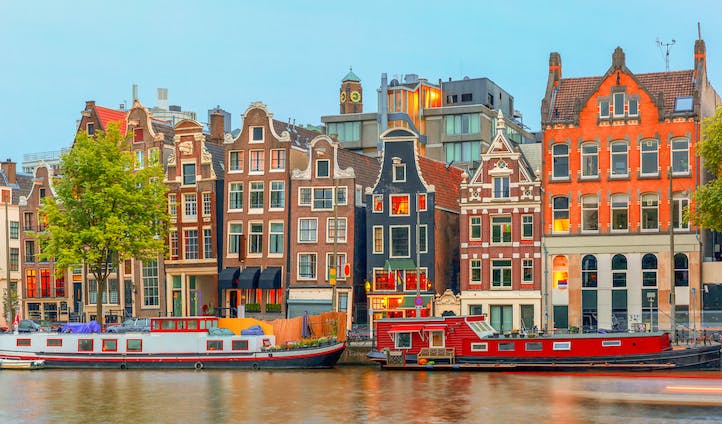 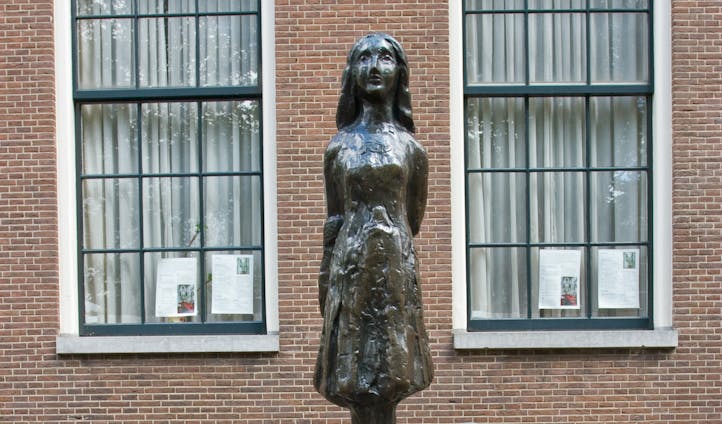 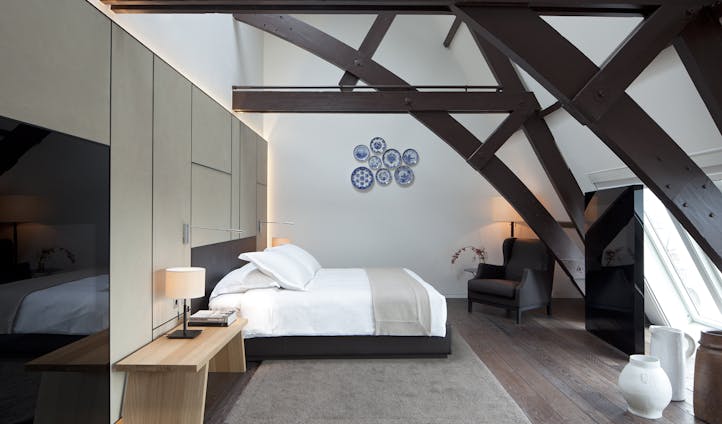 Sleep up in the eaves at Conservatorium Hotel 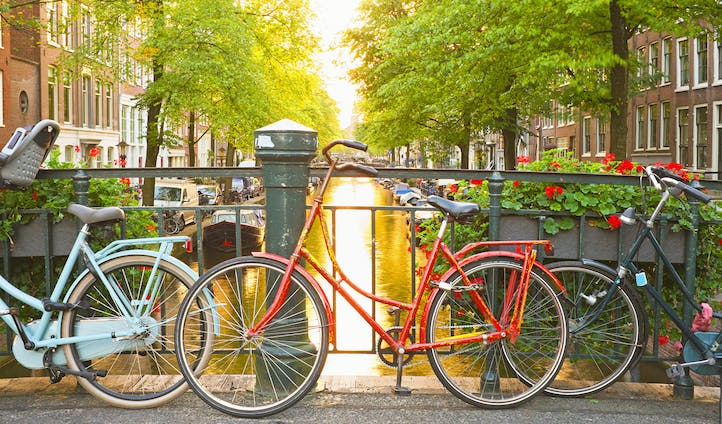 Do as the Dutch do and jump on a bike 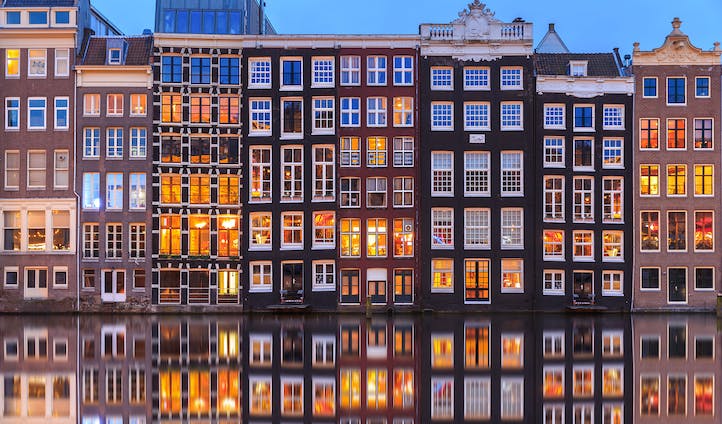 Houses that seemingly float on water 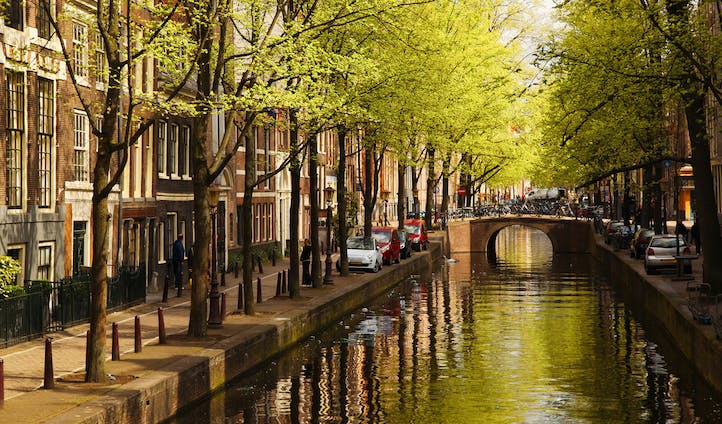 Wander down the canals 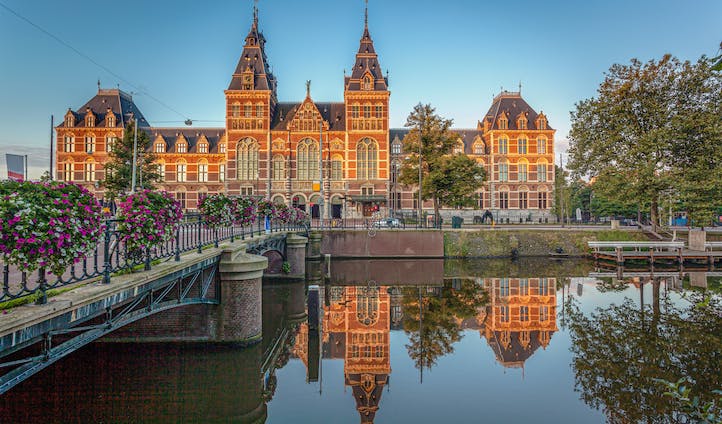 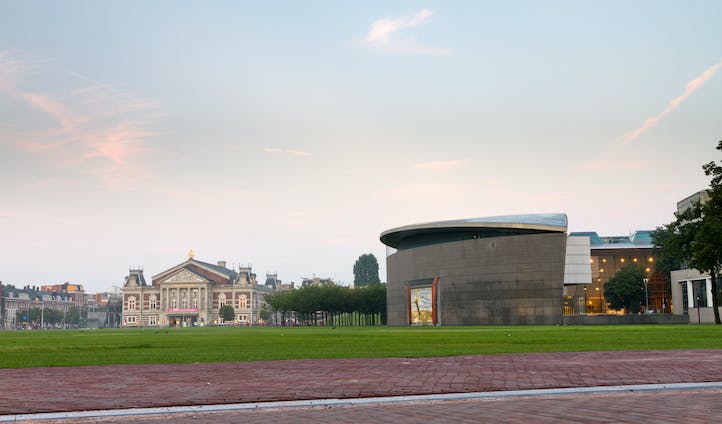 Europe is full of cultural big hitters, making it near impossible to pick just the one destination for your city break. But why pick one – when you can pick two? (Or three. Or four. The sky is the limit with us.) A tried and tested, travel expert adored, combination, Berlin and Amsterdam is a cultural match made in heaven. With its deep history and boundless charm, nowhere does discovery quite like Berlin. Then there’s Amsterdam. Famous for more than just its coffee culture, this canal city is home to some of the biggest names in the art world: Van Gogh, Rembrandt, Vermeer – you name them, you’ll find them on Amsterdam’s walls. Spend five nights wandering through museums, indulging in fine dining and grabbing a slice of history in a luxurious trip to these two hip capitals.

Arriving in Berlin, you’ll check in at Das Stue hotel. A chic boutique hotel with a name that translates as ‘The Living Room’, it is quite literally a home from home. Boasting an enviable location next-door to the beautiful Tiergarten Park, enjoy an afternoon stroll through the gardens before stopping for a bite to eat and a perusal of the rails at nearby shops and restaurants.

Packed with as much culture as history, discover both sides of the city (literally) as you visit Museuminsel in the morning, before stopping by Checkpoint Charlie in the afternoon. A UNESCO World Heritage Site, set on the banks of a small island on the River Spree, Museuminsel comprises five individual museums, meaning it’s got just about everything you could want in a museum. Pergamon for treasures from the Ancient Near East. Neues for classical treats. Bode for intricate sculptures. Trust us, you won’t be bored here. At Checkpoint Charlie, uncover the not-so-distant past at this outpost on the famous Berlin Wall that divided East and West Berlin during the Cold War. See if you can do as many did then, and sneak past the costumed border guards to gain entry to the fascinating museum. For an extra dose of history, you’ll also pay a visit to the Reichstag, home to the German parliament, spectacular architecture – and a fantastic restaurant.

For a glimpse of pre-revolution Germany, head out of Berlin to Potsdam. This former home of Prussian Kings and German Kaisers boasts some seriously impressive architecture and sits pretty on the banks of the River Havel. You’ll see it all on a private boat ride down the river, but nowhere quite embodies the magnificence of the German Empire like Schloss Sanssouci. Germany’s largest World Heritage Site, this summer palace of Frederick the Great is enough to rival Versailles. Explore it’s Rococo style staterooms and beautiful parkland before stepping into the modern age at Babelsberg, the world’s oldest large-scale film studio. From Brandenburg itself to the world famous monument erected in its name, you’ll enjoy your final dinner in Berlin with a view to remember, as the sunsets over the Brandenburg Gate.

In the morning, you’ll wave goodbye to Berlin as you board a flight to Amsterdam. A charming city, crisscrossed by a series of canals and cycle lanes, you’ll spend the next two days flitting between museums and galleries in a cultural whirlwind. Nowhere is better poised for exploring Amsterdam’s famous museums than Conservatorium Hotel. Located in Museumplein, with Van Gogh as your neighbor, Amsterdam’s best sights are at your fingertips. After settling into one of the lofty duplex rooms, head out to visit the home of one of the city’s most famous residents; Anne Frank. A house-come-museum with a world famous story, it provides fascinating insight into the all too short life of this young diarist during the Second World War. From one famous resident to another, you’ll then visit the Van Gogh Museum. But when we say ‘visit’ we don’t mean doing the usual shuffle past the exhibitions in a queue of other people. No. We’re getting you exclusive, after-hours, private access with an expert guide to tell you all about these expressionist masterpieces and the man behind them.

On your final day in Amsterdam, you’ll join a local art historian for an in-depth tour of the beautiful Rijksmuseum. Amsterdam’s National Gallery, the Rijks is home to famous works such as Rembrandt’s ‘The Night Watch’ and Vermeer’s ‘The Milkmaid’. A flawless finale to your trip, you’ll then spend the afternoon at the Diamant Museum, learning about this most glittering of trades before receiving a masterclass in diamond polishing. Souvenir anyone?

See it All in Germany: Fast Cars & Fairy-Tale Castles

Sign up to receive our latest destination inspiration for Germany, as well as our travel predictions for the year to come.