Why should you travel to Ecuador and the Galapagos with us?

Discover a world of intrigue in Ecuador’s colonial cities and an empire of rich biodiversity on the isolated volcanic islands afar.

From ancient Inca settlements to iconic landscapes, you’ll become a true explorer as you delve into the hidden gems that these destinations have to offer. Discover Ecuador’s pre-Inca ruins, try your hand at creating authentic local dishes at Zazu restaurant in Quito and observe some of the world’s most exotic species in the Galapagos Islands. On this trip of a lifetime, we’ll show you a new angle that even Darwin would’ve loved to have seen. 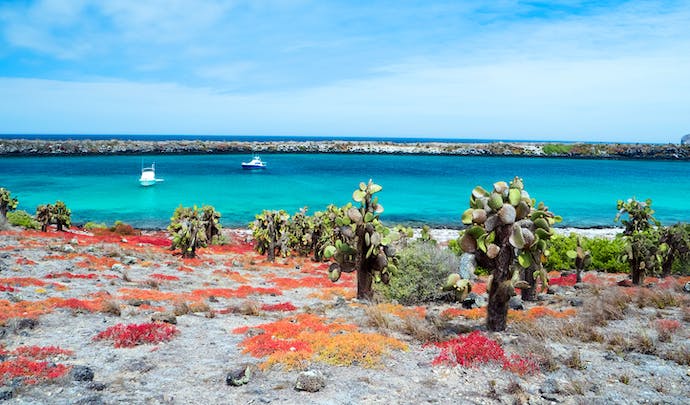 Explore the best of Ecuador and the Galápagos Islands on this exciting and cultural adventure-packed 12-night journey, where our expert guides will show you iconic landscapes and a few hidden gems along the way. Begin y... 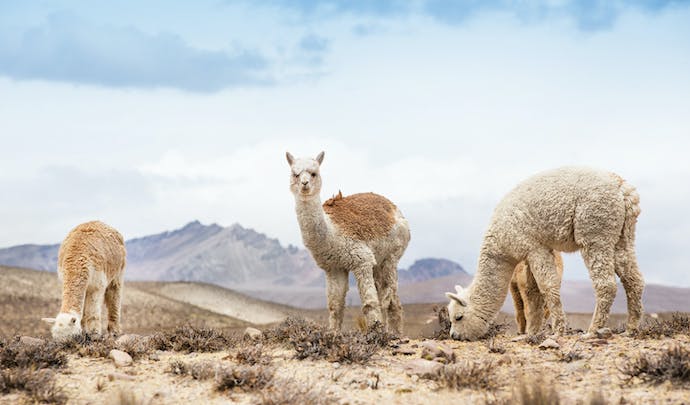 Ecuador & Peru: A luxury holiday from the Galapagos to the Andes

Perched on the Equator, Ecuador and the Galapagos Islands boast a wealth of Andean heritage and wildlife. Follow in Charles Darwin's footsteps as you travel by boat between the Galápagos Islands, spotting the area's leg... 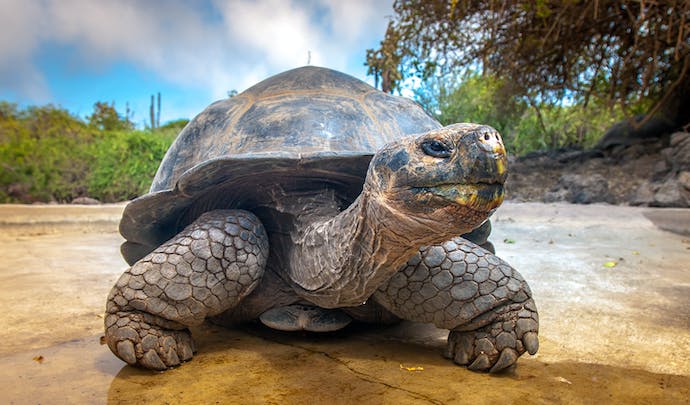 The Galápagos Islands: A Nature-Fuelled Discovery

Secluded, stunning and steeped in wildlife and history, the Galápagos Islands take all that we love about Latin American travel and condense it into an archipelago that escapes words. With that in mind, we’ve devised ... 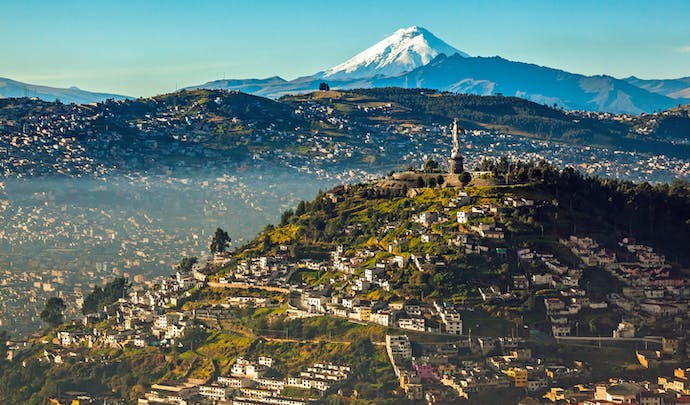 Often just a quick stop-off point for those heading on towards the Galapagos, we think it’s time Quito was appreciated in its own right. Along with art galleries, museums and stunning architecture, Quito is also the de... 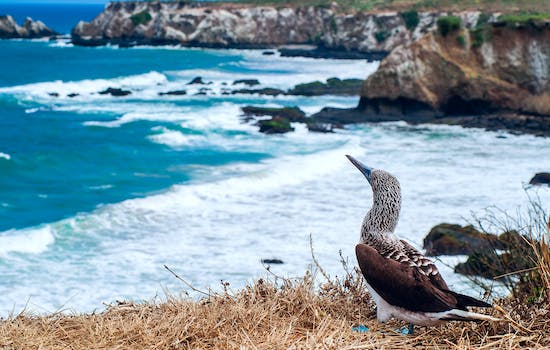 MORE ABOUT ECUADOR AND GALAPAGOS

If the Galapagos Islands were made famous by Charles Darwin – its seemingly infinite species of colourful birds we...

If the Galapagos Islands were made famous by Charles Darwin – its seemingly infinite species of colourful birds were proof enough of evolution – then Ecuador is also defined by the diversity of its landscapes. From high Andean peaks, to Amazonian jungle, and the colonial grandeur of Quito, a luxury holiday in Ecuador is a feast for the mind and the senses. 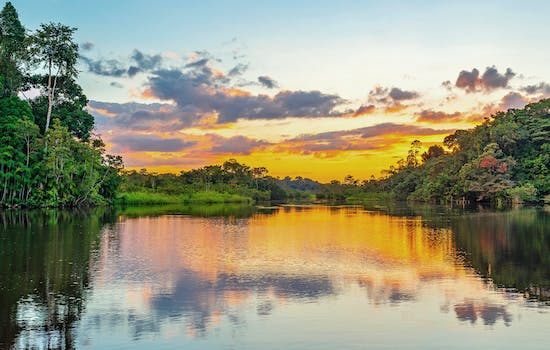 A TOUR INTO THE AMAZON

Satiate your inner explorer by joining a private tour into the heart of the Amazon rainforest, where you will be brought...

Satiate your inner explorer by joining a private tour into the heart of the Amazon rainforest, where you will be brought by plane from the Shell Mera airfield and out, over the lush forest canopy below – marking the gateway for your intrepid trek to plunging, ancient waterfalls and wildlife-rich pathways. 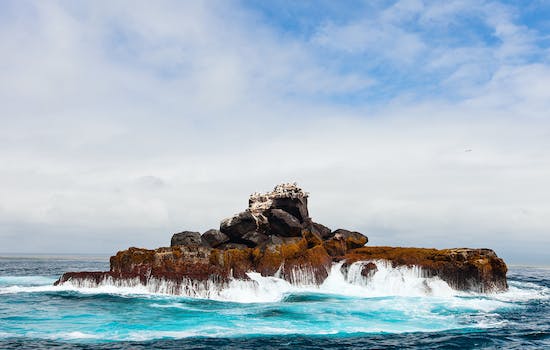 Across the verdant and tropical Galapagos Islands, you’ll encounter one of the world’s most awe-inspiring luxury hon...

Across the verdant and tropical Galapagos Islands, you’ll encounter one of the world’s most awe-inspiring luxury honeymoon destinations. This archipelago – from lunar beaches, black mangroves, and the slow ruminating of gigantic Galapagos tortoises – will enthrall and delight you with a romance in a place where nature reigns.

Top Locations in Ecuador & the Galapagos

If we were asked to choose our top three places in Ecuador and Galapagos, we’d go for these. 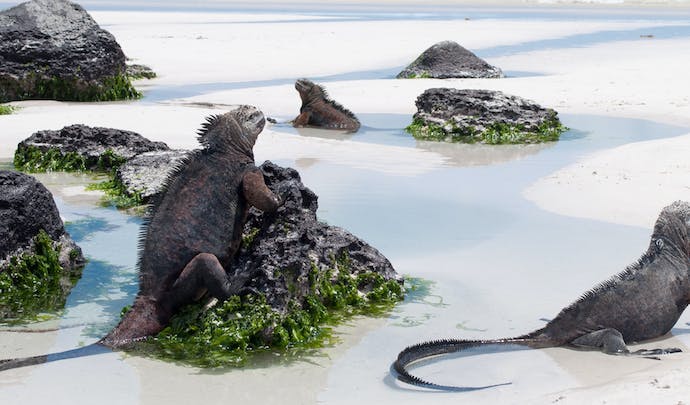 Observe the unique and diverse wildlife that inspired Darwin.

When naturalist, Charles Darwin, first set foot on this magical archipelago, he was so inspired by the exotic wildlife that it led him to create his theory of evolution. Fast forward to the 21st century and the world is also appreciating the wonder of the Galapagos Islands. Let our expert guide – Juan Carlos – show you the lunar beaches, black mangroves and calming slowness of the gigantic Galapagos tortoises. In the evening stay at the charming Pikaia Lodge and in the morning go to Bartholomew Island to have a perfect viewpoint of the island’s landscapes and snorkel with the island’s penguins and sea lions. 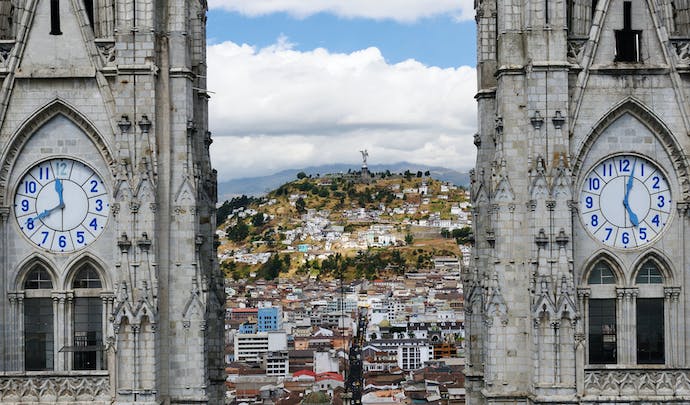 Bordered by volcanoes, Quito’s architectural heritage dates to an era of Spanish colonialism and thanks to being one of the first UNESCO World Heritage Sites, it has been perfectly preserved. Uncover grand churches and beautiful plazas with your guide Tania, before a ride on one of the highest aerial lifts in the world: TelefériQo. Running from the city edge and up along the east side of Pichincha Volcano, you can imagine just how breathtaking the views over Cotopaxi are.

Explore the untouched landscapes that caught our attention.

With a rare glacier and snow-capped mountains, visiting the Cotopaxi and Antisana volcanoes at the Cotopaxi National Park is a beautiful experience. Just outside of Ecuador’s capital, this destination features fantastic walking trails where you’ll be able to meander through local flora and fauna. Learn about the major eruptions of Cotopaxi Volcano as our expert guide takes you on a horse ride through the National Nark, uncovering its hidden gems along the way. 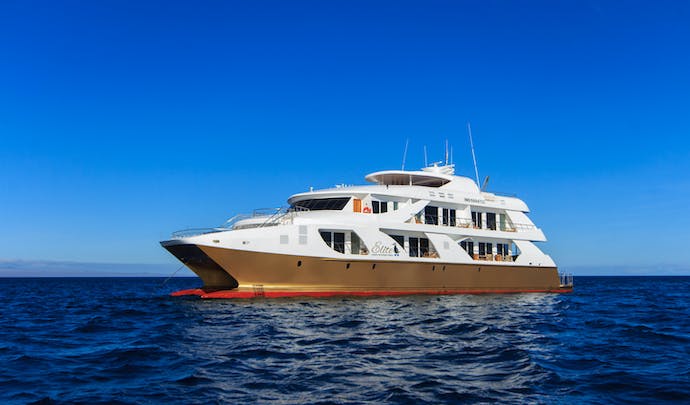 Setting the standard for luxury in the Galapagos, Elite is a sleek and stylish catamaran which will take you into all the island's best corners. Offering just 10 stylish suites, you'll enjoy a hyper-personalised experience from the attentive, knowled... 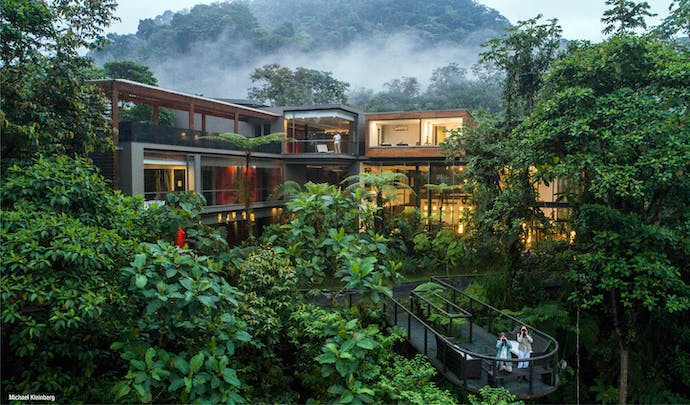 Through a mass of emerald-hued trees and low lying mist cloud forest mists, an ultra-modern 23-room sanctuary crafted from steel, stone and glass is nestled. Mashpi Lodge. Sitting 950 metres above sea level, it is the only building for miles around; ... 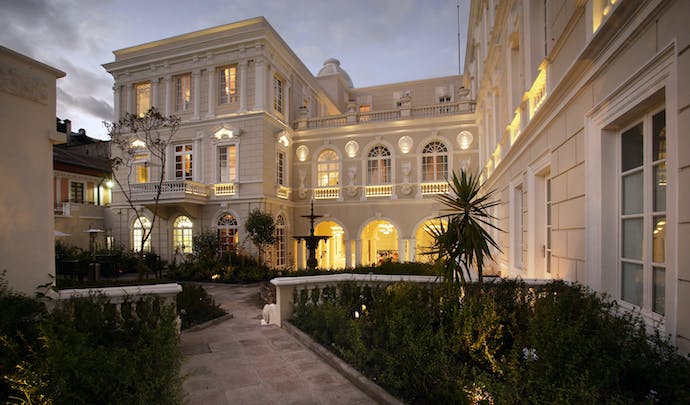 Casa Gangotena in the heart of Quito resembles a Renaissance palace and overlooks the gorgeous cobbled square of Plaza San Francisco. This newly restored historic mansion is host to 31 rooms decorated in a style that mixes Ecuadorian antiquity with c... 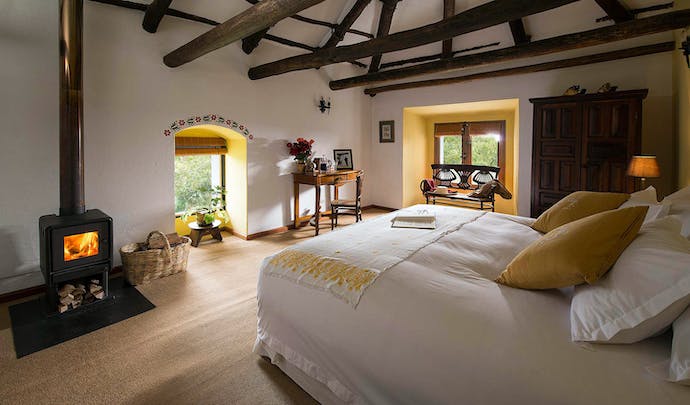 Immerse yourself in Ecuadorian culture and heritage by staying at the 16th century Hacienda Zuleta, sat high up in the country’s Andean mountain range. This remote and historic property was once home to a former president of Ecuador so you can be ... 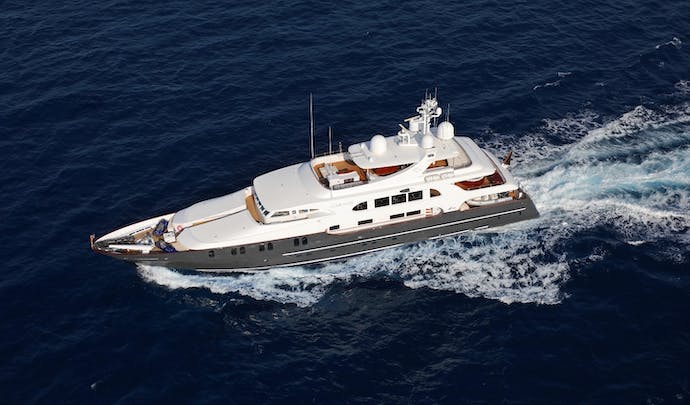 Expedition takes a luxurious turn onboard Aqua Mare. A sleek Italian-designed superyacht, it's charting a route through the Galapagos that is set to take you further than anyone else - and in even greater style. There are just seven cabins onboard, p... 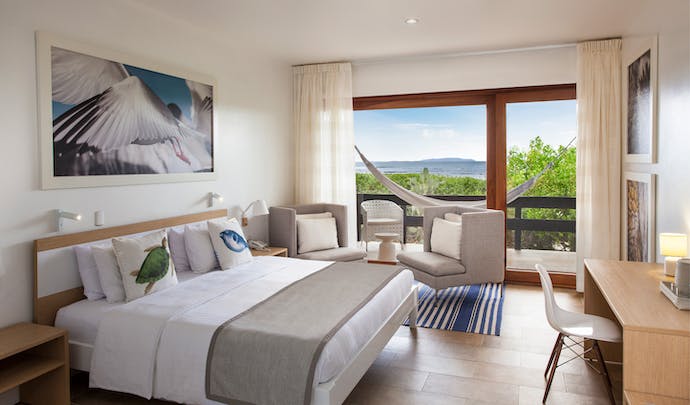 A base for both wild explorations and beachside rejuvenation, Finch Bay offers an all-encompassing Galapagos experience. Discovery extends in all directions with the option to strike out both on land and on sea. Expert naturalist guides accompany you... 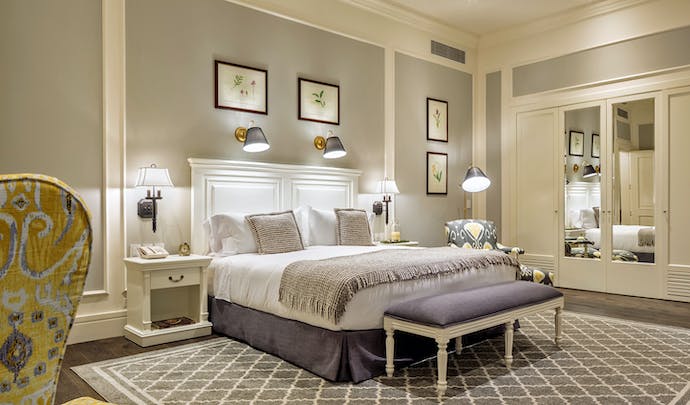 Hotel del Parque, the first luxury boutique hotel in Guayaquil, raises the bar for any others who dare to follow in their footsteps. A combination of modern and antique charm, this colonial property with just 44 suites is a biodiverse oasis. Picture ... 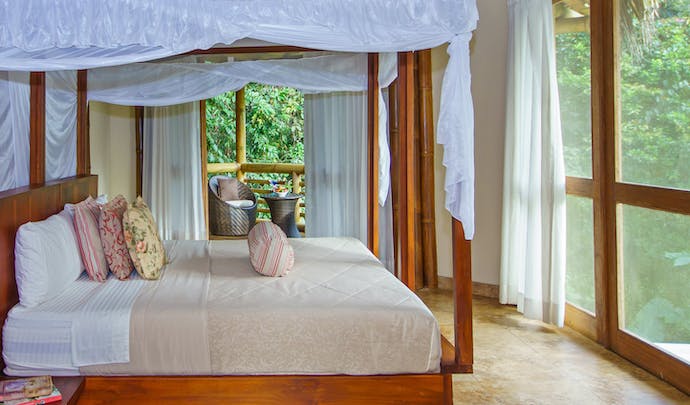 A luxury eco-lodge with 19 suites in the heart of the Ecuadorian Amazon rainforest, La Selva provides the perfect setting for both unwinding and uncovering the secrets of the unique Amazonian wildlife. This lodge has wellness and sustainability at it... 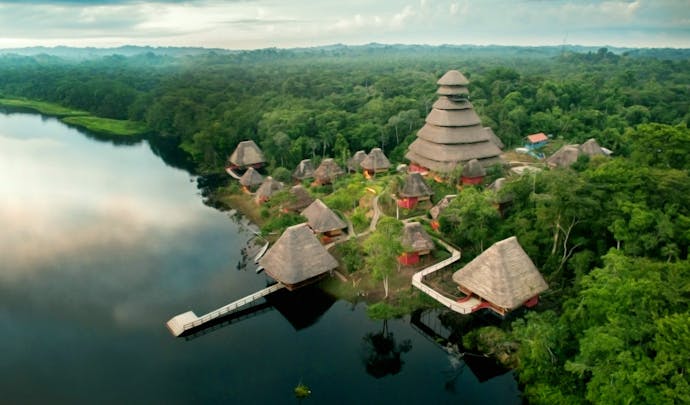 Have you ever wanted to get away from civilisation? Just run away into the middle of the Amazonian jungle with only the parrots, turtles and tapirs for company? At Napo Wildlife Centre you can do exactly that. This luxury 20 room Ecuadorian eco-lodge... 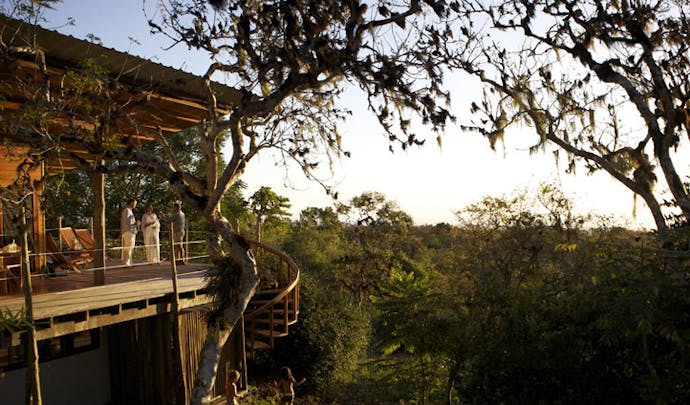 Who says you have to compromise when it comes to combining luxury and nature? Galapagos Safari Camp certainly doesn’t. Built by a European couple with a passion for travel, they know a thing or two about the power of nature and how important it is ... 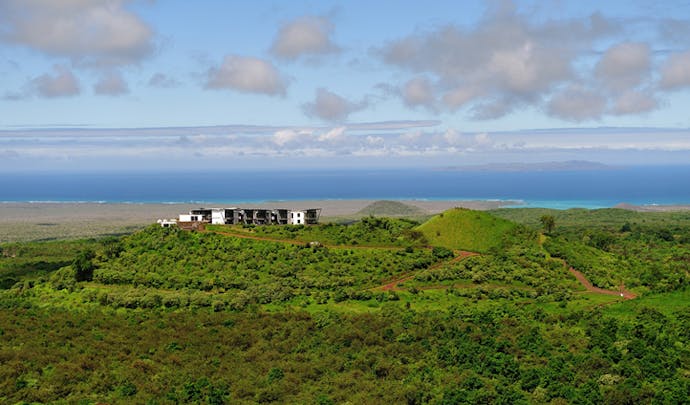 On an island born from fire and volcanoes, the Pikaia lodge sits in 31 hectares of land and private wild giant tortoise reserve. The 12 rooms and two suites across the site ensure your luxury and comfort at this distant point of the world, while the ... 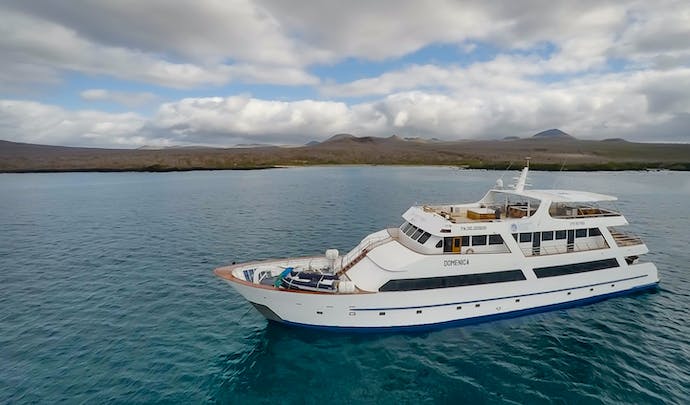 Jump on board the magnificent Galápagos Sea Star yacht, with its nine cabins, and cruise the turquoise water maze of the fascinating and other-worldly Galápagos Islands. As you glide gracefully around this island archipelago, you’ll be staying i... 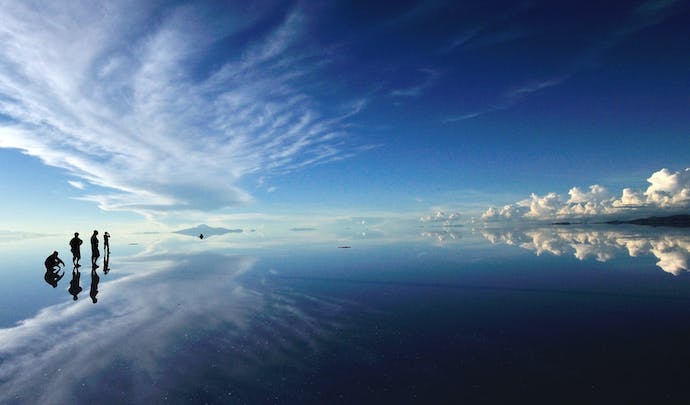 Bolivia has a raw beauty unlike anywhere else in the world. A country that boasts the Amazon, the worlds highest city an... 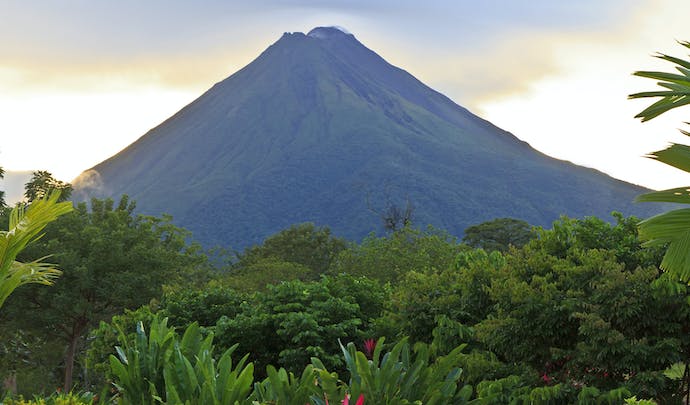 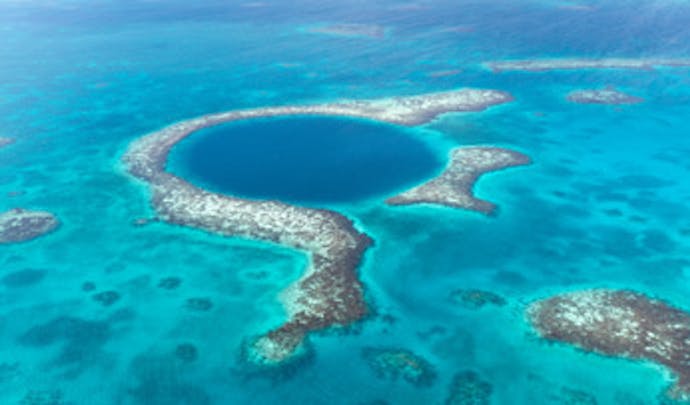 Breath-taking Belize is neatly sat on the eastern edge of Central America, boasting a paradisaical coastline set against...

Bolivia has a raw beauty unlike anywhere else in the world. A country that boasts the Amazon, the worlds highest city an... 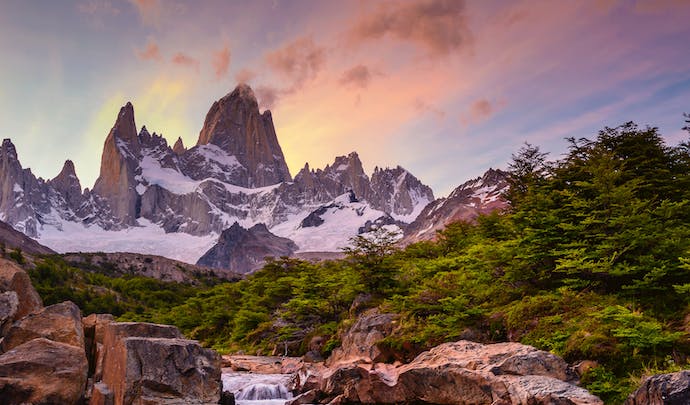 It might be the world’s eighth largest country, but don’t let that put you off, it just means there’s more chance ...

“Black Tomato are one of the coolest things in the world. Don’t even try and live without them”

“Black Tomato, the people who bring you the coolest vacations you’ve ever heard of” 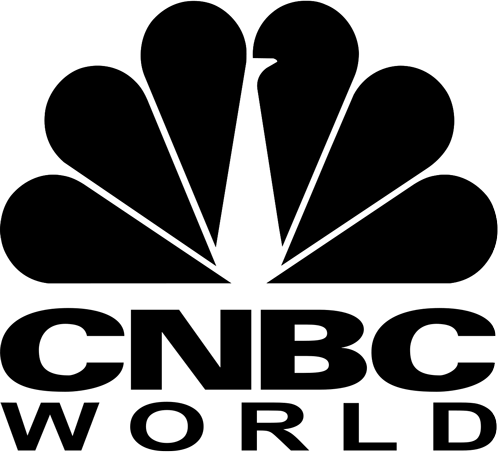