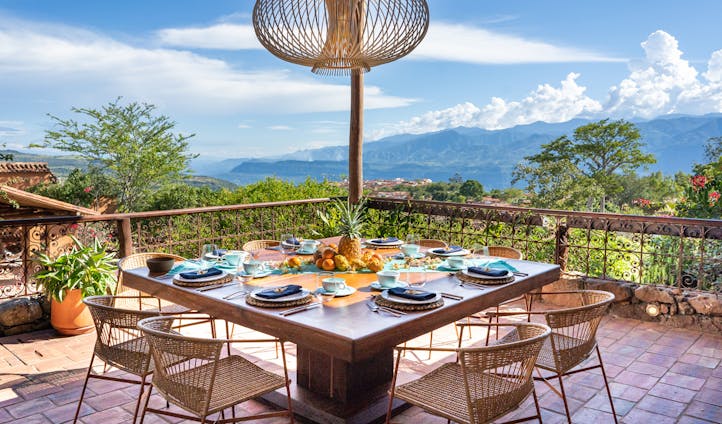 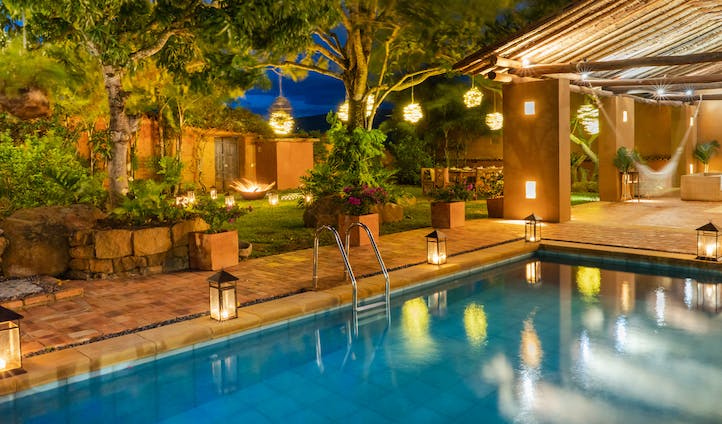 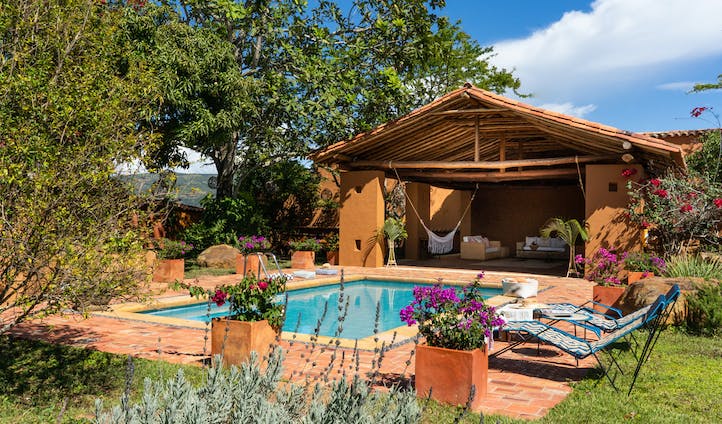 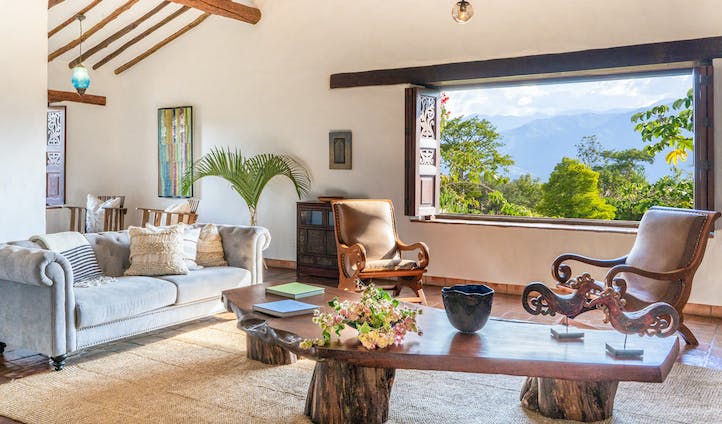 Peacefully nestled at the top of the hill in Barichara 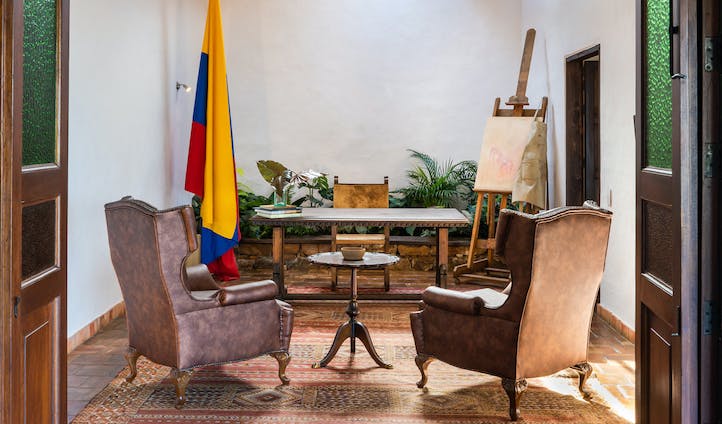 Once home to the former president Belisario Betancur

Relax by the flower-filled garden and poolside 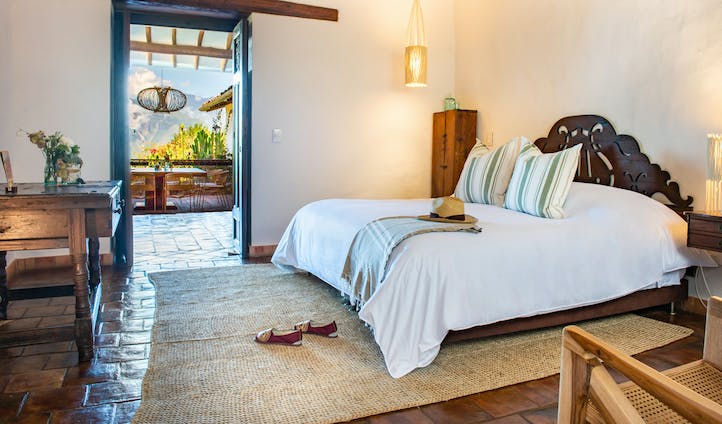 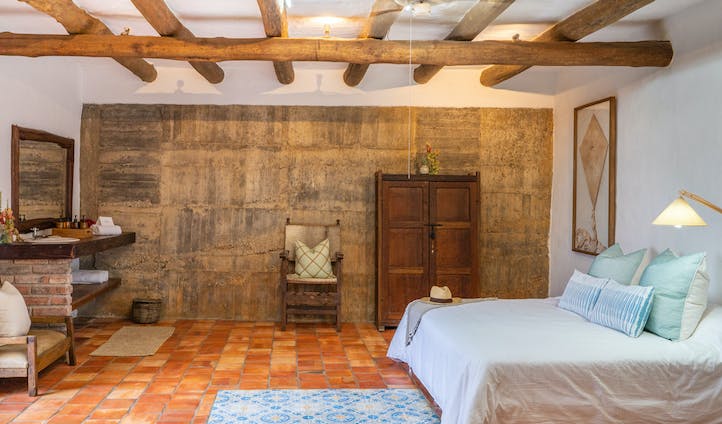 Cooling spaces to unwind in after a day of exploring 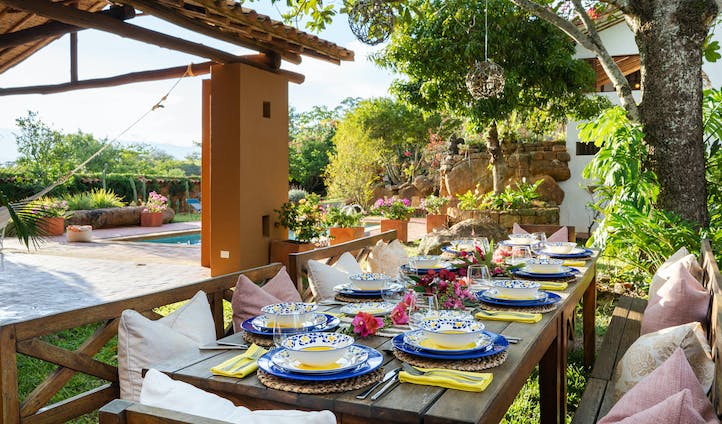 The perfect escape in Colombia's most charming town

There are very few private villas that could outrival the setting and ambience of Casa del Presidente. Peacefully nestled at the top of the hill in Colombia’s most charming town, this unassuming casa opens out onto Barichara and the surrounding Yariguies mountains. Once a summer residence for a Colombian president, this colonial casa is now exclusively yours. Boasting five bedrooms centred around a flower-filled garden and poolside, it’s certainly an oasis in between exploring.

Prided as one of Colombia’s prettiest towns, Barichara creates the relaxed scene for Casa del Presidente. Set north of Bogota and east of Medellin, the Santander region is fantastic for exploring, hiking and mountain biking. The casa’s hilltop setting overlooks the terracotta rooftiles and church domes below, whilst only a short stroll to the quaint restaurants, artisanal shops and central square. From Bucaramanga Airport, the town is a three-hour scenic drive, winding through the rugged mountains. Alternatively, a short 20-minute helicopter flight above the peaks and Chicamocha Canyon into San Gil, followed by a short drive.

Remaining true to the casa’s original features, the five bedrooms showcase understated colonial designs. Comfortable and minimalist, with antique pieces poised against the white-washed walls. Wake up to the outstanding views of the soft clouds hugging the distant peaks as your host prepares fresh juice and Colombian coffee. Breakfast is set out on the terrace, just steps away from your room, beautifully easing you into the day.

Once home to the former president Belisario Betancur, this is a casa with a story to tell. Betancur was considered by many an icon in Colombia due to his commitment to peace negotiations with guerilla groups in the early 1980’s. The original office has been wonderfully preserved, taking you back into the country’s more turbulent times as Betancur helped to shape the road to Colombia’s recovery.

Sign up to receive our latest destination inspiration for Colombia, as well as our travel predictions for the year to come.