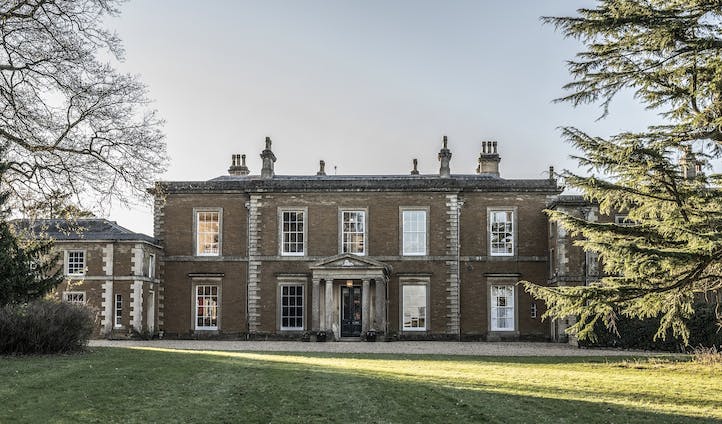 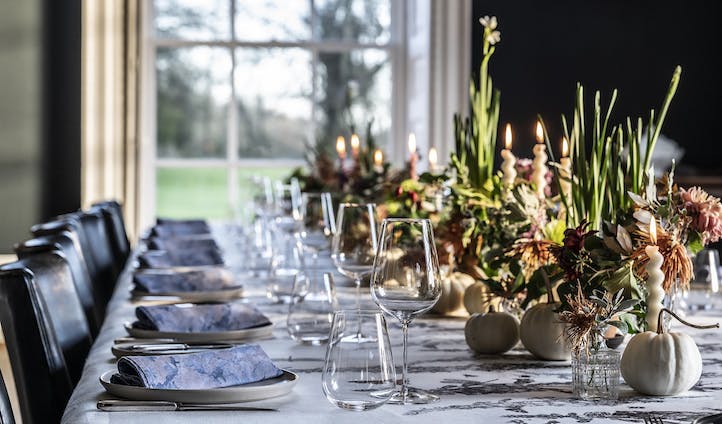 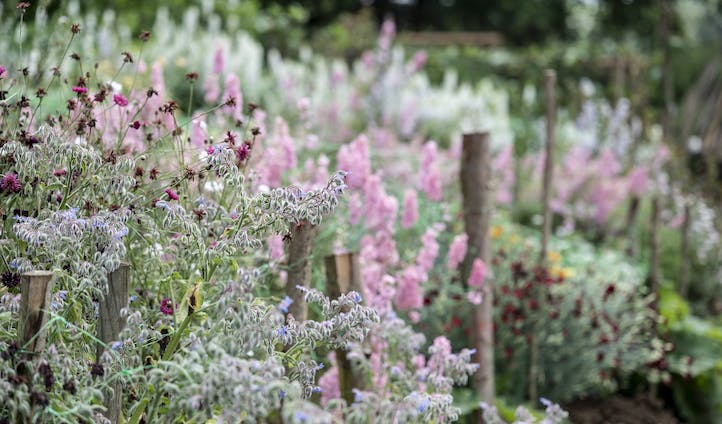 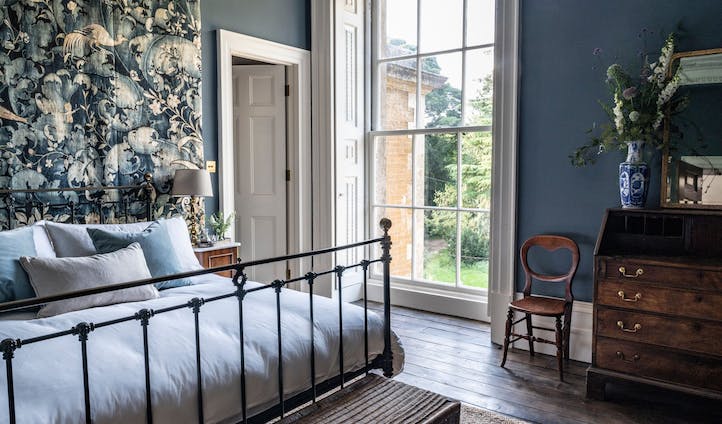 Located among the rolling bluffs of the Leicestershire countryside, Keythorpe Hall―a renovated country manor dating back to 1783―breathes with an elegantly organic charm. No stuffy ‘home of the gentry’, Keythorpe is both enviably laidback and bristling with playful artistry. Its owners (Giles and Barbara) describe it as “perfectly imperfect”. You could imagine Ruskin or John Clare plucking a wildflower from its historic wild gardens. “Birds singing” (Ruskin). “The sky hung with light flying clouds” (Clare). If a property were poetry, Keythorpe Hall would be a sonnet.

This is a sole-use property, meaning that its seven bedrooms, kitchen(s), reception hall, dining and drawing rooms, and gardens are the perfect venue for a sprawling family retreat. While the main bedrooms are large enough for extra beds for smaller children, there’s also a three-bedroom apartment annex tucked away in its own wing above the kitchen (as well as a hot tub). With a croquet lawn, tennis court and extensive gardens, there’s a vast amount of ways to fill your time and keep everyone entertained.

At just a hair over an hour (by train) from London, Keythorpe Hall―despite its seemingly glorious isolation―is fantastically well connected to the UK’s cosmopolitan capital city. But the landscape in which it sits―the tumbling waistline of England, the Midlands―has for centuries been the stage on which the country’s history has been made. Nearby, you’ll find the historic market towns of Uppingham and Oakham and, beyond them, Stamford; widely regarded as one of the finest Georgian towns in England. You’ll be rubbing shoulders with the likes of Rutland Water (one of Europe’s largest man-made lakes), perfect for bird watching, fly fishing, sailing, cycling and walking. You’ll also have excellent access to the likes of collegiate Cambridge (for punting and pub lunches) and Leicester’s extraordinary Richard III Visitor Centre, memorializing the life and rule of one of England’s most storied monarchs. For a literary pilgrimage there’s Stratford-upon-Avon- the hometown of England’s most celebrated bard, William Shakespeare.

Back at Keythorpe itself, you’ll be surrounded by copses of trees and fragrant meadows which rush and tumble from each and every vista. The sun has a strikingly ethereal quality – hazy and golden, as if a spray of 24 karat mist has enveloped everything. Its big, double-height windows are like open mouths; filling the rooms with warm, languorous light. Your hosts can happily organise any number of activities and events, from summertime BBQs to gardening masterclasses and cookery workshops.

While nodding to their 18th century origins, the seven rooms of Keythorpe Hall have been imaginatively brought into the present day. Each bedroom has its own tonality and theme, playfully invoking the region, the landscape, and their deep-rooted history. Elizabethan prints. Peacocked balustrades. Earthen, muted, pastel. Intricate, hand-sewn embroidery sits comfortably alongside contemporary sketches and artwork. Somewhere between the masterfully minimal and the delicately maximal. You’ll find yourself running your hands against every surface. Like almost everything else in the property, the owners have paid close and careful attention to sustainable sourcing and local materials (and produce). From the butter on your plate to the lampshades themselves.

Keythorpe’s kitchen―staffed by Peter Johansen and Bent Varming―was launched by Michelin * winning Nurdin Topham. Its exceptional seasonal menu is filled with ingredients from the property’s historic walled gardens (nursed by the trusty hands of head gardener Claudio). Peppery fronds of rocket, butter-yellow potatoes, sugary sweet parsnips. There are plump, red beetroot and  brightly bursting cabbages. Expect hogweed with your sage, freshly picked mushrooms alongside petals and peppers. Keythorpe’s chefs can happily accommodate you and your guest’s tastes, be it something formal and experimental or causal and low-key. This is somewhere to eat, to drink, and be mirthfully merry; a place in which to sample the very best of England’s local produce and landscapes (all while enjoying bottles selected by the property’s own wine concierge). Fans of design will also enjoy the warm red of its main corridor, painted in a shade chosen by interiors superstar Edward Bulmer. This has been eponymously titled EB Keythorpe Red. Details count.